Back On? Lamar Odom and Sabrina Parr Celebrate Anniversary After Split

Giving love another try? Lamar Odom and Sabrina Parr celebrated the one-year anniversary of their engagement one week after calling it quits.

On Wednesday, November 11, the duo took to their Instagram Stories to reflect on their relationship. Odom, 41, reshared a photo that Parr, 33, posted of the retired NBA star kissing her on the cheek.

“Made it in time for our one year anniversary,” she captioned the pic, adding a kissy-face and a prayer-hands emoji. 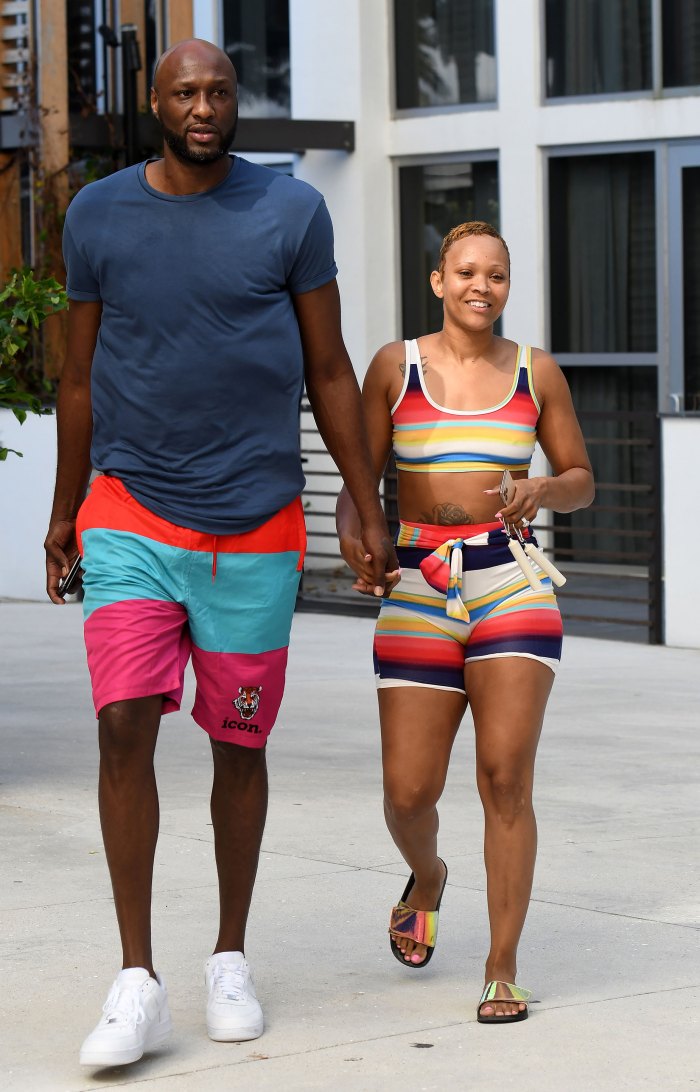 Additionally, Parr reflected on the day that Odom popped the question. “😫 😫 just a year ago today… me and Lamar got engaged!!!” she wrote on her Stories, sharing a video of the moment following the proposal. “Everyone thought that the proposal happened at the restaurant, but it actually happened privately BEFORE we got to the restaurant! That will forever be our little secret.”

In her next Instagram Story update, the fitness trainer shared a video where she revealed her plans to go on a “quick little getaway.” The clip showed her wearing the same shirt as the pic of the former Los Angeles Lakers player kissing her cheek.

Odom and Parr got engaged in November 2019, just three months after they first stepped out in Atlanta together. In August, the pair announced via Instagram that their wedding was set to occur in Miami on November 11, 2021.

Earlier this month, however, Parr revealed that the twosome had chosen to pump the brakes on their romance. “Y’all know I’m honest and transparent so I have to be the first to let you guys know that I am no longer engaged to Lamar,” she wrote an Instagram Story post on November 4. “This has been a difficult decision for me to make but it is the best for myself and my children.”

Lamar Odom’s Ups and Downs Through the Years Read article

The Cleveland native then suggested that Odom needed to work on himself, adding: “Lamar has some things that he alone has to work through. I love him dearly but I am no longer able to be by his side while he seeks the help he so desperately needs. I wish him all the best and I am asking that you pray for everyone involved.”

During their engagement, Parr revealed that the couple chose to abstain from sex until marriage. “Him and I don’t even have sex, believe that or not,” she told Hollywood Life on December 11. “Once Lamar got saved, he developed a relationship with a pastor and there’s a lot of things he just wants to grow, areas he wants to grow in, and things he wants to improve on as a man. And as a man, the pastor suggested to him, it’s not godly if Christians like to have sex before marriage.”

Odom was married to Khloé Kardashian from 2009 until they split in 2013. Though their divorce was put on hold in 2015 after he suffered a near-fatal overdose, they finalized the case in 2016.

Listen to Us Weekly’s Hot Hollywood as each week the editors of Us break down the hottest entertainment news stories!

Read More About: Back On? Lamar Odom and Sabrina Parr Celebrate Anniversary After Split

« Cynthia Bailey Reveals How Her Wedding Was COVID-19 Free

This Is How You Download League Of Legends: Wild Rift On Android And IOS Mobile Devices »